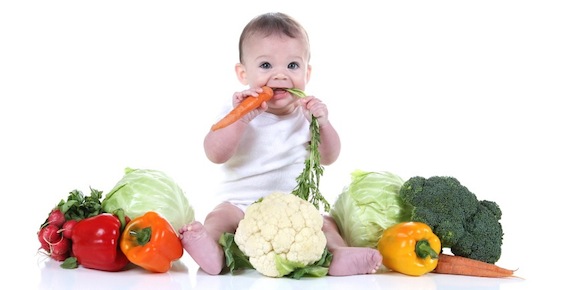 Though many people have made the switch to organic formula and baby food, it still does not seem like many we speak to fully buy into the importance of eating organic at all ages and in every type of food. A lot of people tell me they wash their fruits well and believe that removes the pesticides from the fruit. (It doesn’t.) Many people also tell me they buy organic meat and dairy and think that is all that matters. (It isn’t.)

At Sprout, we often have to make a choice between supporting health and doing what is best for the environment. Organic food, however, is one issue where the environment and our health go hand in hand. Pesticides used in crop production poison our farmland and water. In this case, even if the below information does not convince you that buying organic is a much healthier choice for your family, please try to support organic farmers and help us move closer to a pesticide-free earth.

According to a report done by the National Research Council, 30% of commonly used insecticides, 60% of herbicides and 90% of fungicides are potential carcinogens. Children also consume more food per body weight than adults and the EPA acknowledges they are more vulnerable to chemicals including carcinogens used on conventional crops.

A number of studies have linked prenatal exposure to organophosphate chemicals (now the most commonly used pesticide) to increased rates of developmental disorders and autism. See the NIH studies here and here.

Meat and dairy are the most likely to contain hormone disrupting toxins.
Avoid animal fat as much as possible. Toxins like PCBs and Dioxin travel through the food web in fat and become more concentrated as they move up the food chain. A 1994 EPA report found that meats and cheeses are a major source of dioxin exposure. Eating less animal fat will greatly reduce your exposure to hormone disrupting chemicals.

Earl Gray, a reproductive toxicologist who was at the EPA back in the nineties, found male sexual development in rats seriously derailed (nipples on males in a breed where the males don’t have nipples) because of maternal exposure while the males were in the womb to vinclozolin, a synthetic chemical that is widely used to kill fungus on fruit.

He claims that evidence shows that humans and animals have a perfect correlation between their reactions to hormone disrupting chemicals.

It isn’t too late.
We often hear parents of toddlers say, “It’s too late now for me to worry about this. What’s done is done.” However, research has shown that a change at any age can have an effect. In 1987, researchers at the National Academy of Sciences collected urine samples from suburban children. Biproducts of pesticides were found routinely in the samples. The researchers replaced all the foods the children ate with the organic version. Within 24 hours, the concentration of pesticidesdropped significantly. After returning to their previous diets, the levels of exposure to organophosphate pesticides returned, sometimes above the safety limits set by the FDA.

Better for the environment.
Supporting organic produce not only reduces your family’s exposure to pesticides, but helps to keep pesticides out of the water supply. Home water systems do not necessarily remove hormone disrupting chemicals, nor are bottled waters regulated for such.