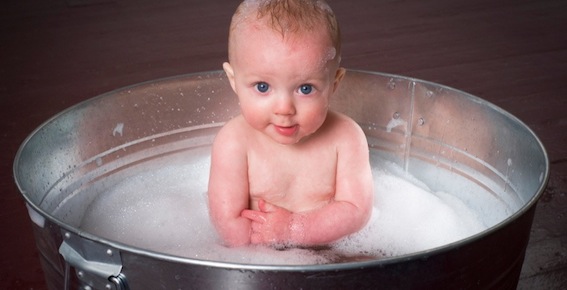 All our products are meticulously evaluated to ensure they are safe. Find Personal Care Products in our  Bath & Healthy Home section. Here are few items we love: Earth Mama Angel Baby Shampoo and Body Wash; Nalu the Seahorse and Kalu the Whale; Boon Naked Tub.

In November 2011, I had just given birth to my second daughter, Amber Rose. All of the nurses were amazing, and we truly felt that the hospital experience was as good as it could be. Though I was somewhat in a fog, I think my daughter was given two sponge baths during the 3 days we were there. I wasn't watching when they did it and am not sure what products they used, but when I saw the bottle of Johnson's & Johnson's baby shampoo on the sink in our hospital bathroom, I cringed. I never use products like that at home, and I, of course, urge all of our customers to use only the most natural ingredients on their newborns. However, I didn't speak up. Everyone had been so nice, and I didn't want to make a fuss. Why is it that we all feel so helpless and unable to speak for ourselves when in a medical setting? When I saw the article Baby's Tub is Still Toxic a week later, I felt justified in my feelings about this product but also angry with myself. Being on my second child, I should have known to pack my own products in my hospital bag and to request that the nurses use them. I urge all of you who are packing your hospital bags to read this article and be more prepared than I was.

The following is a 2011 Press Release from the Campaign for Safe Cosmetics:

[A copy of the press release can be found here, or you can read the full report: Baby's Tub is Still Toxic]

More than two years after leading health and parents' groups asked Johnson & Johnson to reformulate its flagship baby shampoo to remove a cancer-causing chemical,(i) the company is still using formaldehyde-releasing preservatives in Johnson's Baby Shampoo in some countries (including the US), while formulas sold in other countries are free of these chemicals, according to this analysis conducted by the Campaign for Safe Cosmetics.

Why the double standard? Don't all babies deserve to be protected from unnecessary exposures to carcinogens? We're calling on Johnson & Johnson to stand up and make a commitment to remove formaldehyde from all its baby products in all the markets it serves.

Update! In response to the Campaign for Safe Cosmetics report, Baby's Tub is Still Toxic, Johnson & Johnson released a statement on Oct. 31 saying it is phasing out formaldehyde-releasing chemicals from its baby products worldwide. See statement.

Between July and October of 2011, the Campaign for Safe Cosmetics purchased and reviewed labels of Johnson's Baby Shampoo sold in 13 countries to see if the products contained quaternium-15, a chemical preservative that kills bacteria by releasing formaldehyde.

Obviously, it is possible for Johnson & Johnson to make baby shampoo without formaldehyde, and that's what the company should be doing in all countries.

The Problem with Quaternium-15

Quaternium-15 releases formaldehyde into cosmetics products. Formaldehyde is classified as a known human carcinogen by the U.S. Department of Health and Human Services(ii) and the International Agency for Research on Cancer. The National Cancer Institute, the World Health Organization and the National Toxicology Program have all identified a possible link between formaldehyde exposure and leukemia.(iii,iv,v)

Formaldehyde and quaternium-15 are also potent allergens that can trigger rashes and other skin inflammation problems.(vi) The North American Contact Dermatitis Group considers quaternium-15 to be among the most clinically significant contact allergens in children.(vii)

Leading health and environmental groups in the United States have sent letters and met with Johnson & Johnson executives several times over the past two and a half years to urge the company to reformulate its baby products to remove chemicals of concern, including quaternium-15.

What You Can Do