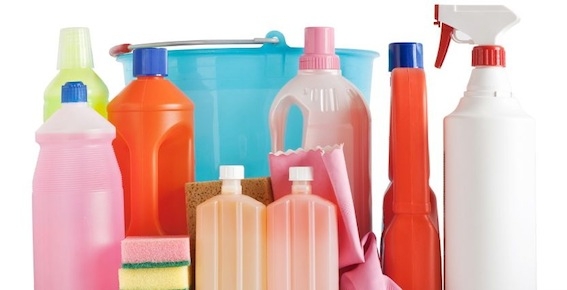 CleanWell Founder and Chief Scientist Dr. Larry Weiss is a widely published physician, scientist, and expert in the chemistry of natural products, infection control, and epidemiology (the study of the causes and patterns of illness). He sent us the below information on the antimicrobial chemicals which are collectively referred to as “quats” – shorthand for quaternary ammonium compounds. These chemicals are commonly found in basic household and industrial cleaning products. Dr. Weiss believes they are causing tremendous damage to our health.

There are been several generations of quats and since their introduction in the 1940’s and they have long chemical names. For the sake of clarity and simplicity, the term “quats” will serve to represent the whole class.

The prototypical quats are Benzalkonium Chloride and Benzethonium Chloride. They are commonly found in personal care products such as first aid products, hand sanitizers, and as preservatives in eye drops, OTC medications, and even asthma inhalers! Typically surface care products such as disinfectants and sanitizers contain blends of 4th and 5th generation quats that are referred to as “synergized quats.”

At the time that they were introduced into widespread use in commercial and consumer products starting in the 1960’s, quats were felt to be a significant advance over the more toxic phenolic and bleach based disinfectants. Since the acute toxicology profile represented an improvement and reduced the incidence of chemical burns and poisoning, they were felt to be “safe.” There was little concern or appreciation at the time for the potential health implication of chronic subacute chemical exposure. During the past 20 years widespread use of quats in commercial and household cleaning products has grown explosively. The recent introduction and proliferation of “all-in-one” cleaner disinfectants based on quats continues to increase the degree of chemical exposure. Numbers are difficult to find, but estimates that I have seen suggest that we are using tens to hundreds of thousands of metric tons of quats annually.

A number of references in the bibliography below support the correlation between the use of quats and an increase in asthma and other chronic illness. This is a limited selection – there are many, many more. The background on this is as follows:

Coincident with the growth in use of quats by commercial cleaners, epidemiologists found an increase in occupational asthma, chronic dermatitis, and immune hyper-reactivity syndromes (allergies) in healthcare workers and janitorial workers. The bibliography includes a number of publications reporting the association between cleaning and high rates of occupational asthma. In the 1990’s epidemiologists found that janitorial workers had more than double the rate of occupation asthma of any other occupation. At the same time most epidemiologists believe that these numbers grossly underestimate the actual incidence because of underreporting by employers on the OSHA 200 logs. There is widespread acceptance by the medical community that quats (and bleach) are among the most asthmogenic chemicals commonly found in the workplace.

Coincident with the increase in occupational asthma in adults, there has been a disturbing and dramatic increase in childhood asthma. Over the past 25 years the incidence of childhood asthma has tripled along with a number of other immune hyper-reactivity syndromes including severe food allergies. The association between asthma and allergies has been noted by many investigators. Childhood asthma now afflicts over 10% of children ages 5 – 17 and is the leading chronic illness of childhood and it is the third leading cause of hospitalization. This means that essentially every parent either has a child or knows children who suffer from asthma. The impact of a child suffering from an acute asthmatic episode on everyone in the family or classroom is dramatic and cannot be underestimated. The correlation between the increase in the household use of spray cleaner disinfectants containing quats and childhood asthma has not received much attention to date, despite the compelling parallels with occupational exposure. However any chemical exposure that the public or the media suspected as causative would likely trigger a strong reaction.

The important point to remember is that quats have been implicated BOTH as causative and as triggering agents in asthma. Even if you don’t believe that they cause new cases of asthma (the case is very convincing but it is based on epidemiology and lab data), the direct and irritating effect of quats on those who have asthma is immediate and dramatic.

The bibliography includes several references from the medical literature reporting that quats in general and the disinfecting quats specifically are potent immunological adjuvants, compounds that accentuate the immune response to antigens. These are commonly used to enhance the immune response to a vaccine. The chronic exposure to aerosolized immune adjuvants in an enclosed space would be expected to increase the immune response to common environmental antigens including dust, molds, and others. The same thing would apply to the skin – hence the correlation with chronic dermatitis. While this connection remains a hypothesis and, in fact, the role that it plays in the domestic setting is questioned even by the investigators in the2007 Indoor Air reference, it is well established that quats can trigger acute asthma attacks in children who already have the diagnosis.

Another investigator found that children of cleaners who were exposed to quats during pregnancy had a higher incidence of childhood asthma even when all other factors were taken into consideration. All of these articles suggest that the exposure to quats can have long lasting immunological implications. Although the evidence for a specific mechanism to connect the exposure to the associated disease states remains unknown, the epidemiology, laboratory, and animal studies paint a compelling picture that should give us reason to question the widespread use of this disinfectant chemistry. At the very least, we ought to limit the exposure and reduce the use of aerosol quats.

The below referenced report from the prestigious journal Nature (7-19-08) found that there was a dramatic reduction in fertility in mice exposed to quats. This was reported by a Washington State researcher who previously reported the problem with phthalates.  Although the title of the article refers to a “lab disinfectant,” the quat in question is the same one that is used in most household products. This is the first connection between a quat and infertility but it will almost certainly not be the last. Just as disturbing is that it took between weeks and months for the fertility to return to normal even after the quats were removed. This would be a very difficult thing to study in humans so it will probably continue to be investigated in animals. In any case, it would suggest that young women should limit their exposure to these chemicals.

The combination of the massive global manufacture of quats (hundreds of thousands of tons) and a relatively slow bio-degradation have resulted in widespread contamination of the environment. Quats can be found in parts per million concentrations in essentially every municipal water system and most aquifers. Exactly what the implications are of this level of contamination remains unknown.

Correlation and Causation – A Caution:

It is important to keep in mind that while a compelling correlation may imply causation it doesn’t constitute proof of causation, which requires a mechanistic explanation and is often very difficult (or impossible) to demonstrate. As attractive as it may be to connect the dots, correlation without laboratory evidence demonstrating a basis for the pathology is only a correlation, and we should tread with caution and limit expressions of certainty or use of words like “proof.” In many cases, a correlation may be all we will ever have to solve the problem, so humility and an open mind are essential. Of this we can be certain: the public will always mistake the correlation for the cause and respond accordingly.

To illustrate the hazards of mistaking a clue for the solution, I offer the following relevant example. A number of explanations for the increase in childhood asthma have been proposed and picked up by the public including the so-called “Hygiene Hypothesis.” This hypothesis suggests that the increase in asthma is the result of an under stimulated immune system due to excessive hygiene. Essentially, the children get asthma because we didn’t let them get sick often enough. Despite the limited evidence supporting this explanation, and no convincing laboratory data, the hygiene hypothesis has caught on with a sector of the public that is concerned about the increase in asthma and finds the practices of personal and public hygiene a convenient scapegoat. In fact it illustrates the propensity for the public to take an easy, but incomplete or incorrect explanation and run with it. Evidence is optional. True or false, once released into the public forum, a catchy hypothesis develops a life of its own and spreads just as quickly as any infectious disease.