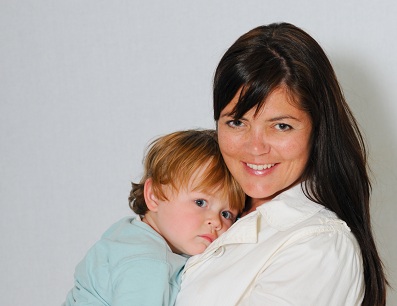 Four months after the birth of my son I started to recognize that I wasn't really myself. I was always tired, granted I did have a four month old at home so this was to be expected, but something was just not right. I was also always uncomfortably hot. The 10 block walk to and from the grocery store left me sweaty and gross, I was sleeping with a fan blasting in my face and I could never seem to cool down. I was also jogging four miles five mornings a week and could not lose one pound of the baby weight I had gained. I have always been an active person and never had any problem taking control of my weight. Depressed and frustrated I scheduled an appointment with my general doctor. In his office he told me that nothing was physically wrong with me and I had to chalk it up to hormones and genetics. Basically I had to accept the fact that this was my “new body”. I left his office upset and frustrated, but trusting his medical opinion.

A year later the migraines started. At first I didn’t know what hit me. I didn’t necessarily feel terrible pain, it just felt like someone was pressing the back of my head against a brick wall with a bulldozer. Bright lights and loud sounds sent me into a dizzying downward spiral. I couldn’t focus, my work suffered, my family suffered, and I suffered. My doctor initially put me on a mild pain medication that he claimed would get rid of the pain and pressure. When that didn’t work he referred me to a neurologist to take a deeper look into the possible causes and treatments. Two CT scans, one MRI and a handful of blood tests later, they still came up empty handed. Physically there was nothing wrong. This was great news, but unfortunately I still had to live with the crippling pain. No medication came close to giving me any relief. Desperate and sinking fast, I even tried botox injections and had nerve blocks injected in the back of my head. The whole time I knew how terrible this must be for my body, but I didn’t care. I just wanted to feel better. This continued for about six months until one day they just seemed to go away.

Feeling like myself again and ready to expand our family my husband and I started to try for a second child. Three months into it I was positive I was pregnant. I had all of the symptoms including the overwhelming fatigue and nausea. We were so excited, but we soon found out that I was not. We continued to try and each month I would get the same symptoms with no pregnancy. The weight started to pile on, my headaches returned and each month my hopes of expanding our family were crushed. After about four of five months of this I contacted my OB and asked if she would see me. I knew something was wrong, I could feel it. My bizarre symptoms must have some explanation. She explained that there was nothing physically wrong with me and that sometimes it can take up to a year to have a baby. Because I had multiple rounds of bloodwork done for my migraines, she said there was no need to re-take them and nothing else to look into. On paper I was the epitome of health.

A few months ago during a yoga class my limbs just seemed to go numb. My fingers and hands swelled up to the point that I couldn’t get my rings on and off.  That day I called my general doctor and again was told there was nothing physically wrong with me. He answer was to refer me to get a psychological evaluation.

In November after almost a year and a half of trying to get pregnant and still experiencing bizarre symptoms my OB ordered some more blood tests. I wasn’t going to let my “so called” health issues stop me from expanding our family. I just kept thinking that one day this would all just go away or that another pregnancy would “re-set” my body. A few days later I got a blunt e-mail with the results. I was told that I had high FSH levels and that even with fertility treatments I may not be able to conceive. She said that I could keep trying on my own or I could schedule a fertility consultation, and she listed a phone number to call. Again, this was all over e-mail. I was in shock and despair and did not know where to turn. I immediately called to schedule the fertility consultation. I also started seeing an acupuncturist in hopes that maybe eastern medicine had an answer.

The day after our son’s third birthday we sat down with a reproductive endocrinologist. She was sweet and caring but had some pretty daunting news. Not only did I have a high level of FSH, I also had an undetectable amount of AMH. She was thorough in explaining that I had the follicle supply of a 44 year old and quite possibly am going through peri-menopause. I am in my mid 30s. I was in shock and denial. How could this happen? Through the remainder of the visit I was in such a daze that I couldn’t really take much more in. She scheduled more blood tests to check for an underlying cause and we waited for the results.

A few weeks ago I was diagnosed with euthyroid Hashimoto’s disease, an autoimmune disease where my body is attacking and destroying my thyroid. Although this may not completely explain my fertility issues, it explained everything else. The headaches, weight gain, depression, irritability. Everything I have been telling my doctors for two and a half years, explained with one simple blood test. I had just assumed that they looked for everything. I trusted them when they said “there is nothing physically wrong with you”.  I believe that this is what caused my infertility, after all it is an autoimmune disorder. My acupuncturist agrees.

Although I may not have the best odds, I am still not giving up hope that we will somehow have a second child. If we don’t, my husband and I are so thankful that we have one healthy, amazing, incredible son and will never take him for granted. I know how many people struggle with fertility issues and go through great pains to have what we have. We will always be thankful. I hope that by sharing my story I will reach other women in similar situations. Women who know their bodies and want to take control but don’t know how. I thought I was being an advocate for myself and I can’t think of how much clearer I could have been with my doctors. I don’t want to look back and say what if, but I do know that if I ever have a gut feeling something is off I will insist that they look into every single possibility before dismissing me and referring me to psych. With everything that has happened in the past three years I have adopted a new mantra, trust your body. I hope by telling this story I will give other women the courage to do the same.