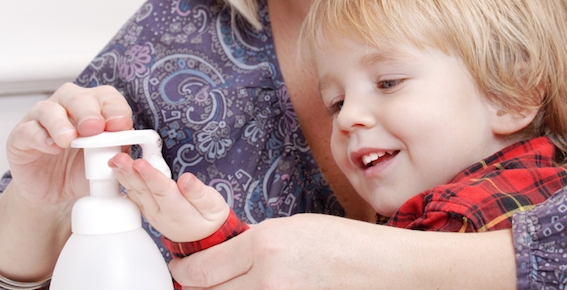 In my previous life (really only a few years ago) I worked at an investment bank researching the coolest new companies in the natural and organic industry. I came across CleanWell at a trade show and was thrilled to find a product that would sanitize my hands without leaving the filmy feeling and alcohol smell of Purell. I learned that CleanWell was the only “natural” antibacterial solution on the market, which made me wonder what was wrong with the “non-natural” ones all the moms (including mine) carry around in their purses. That's when I asked the Dr. Larry Weiss, the founder and chief scientist behind CleanWell, to go to lunch with me to explain the science behind it. What I found was one of the most knowledgeable people I had ever met, but what struck me most was his passion for the health and safety of our children. He seemed close to tears while talking about how tragic it is to see a child in the ER for an asthma attack, something he believes can be largely prevented by changing the chemicals in our every day environment. I truly believe that Dr. Weiss would do his job for free and give away CleanWell products for no personal profit if it meant that he could spread the word about the dangerous chemicals we surround ourselves with and cause a real change in the behavior of consumers and corporate America. In the meantime, he uses the best platform he can, the selling of safer products, to get his message across. The best I can do is use this blog as a platform to share his concerns with young parents. Maybe if we all share this information with our friends, and they share it with their friends, then our children's children won't grow up with the same toxic chemicals that we are surrounded with today.

Dr. Larry Weiss sent us the below information on triclosan, a common ingredient in many household product, especially those labeled as “antibacterial.” Dr. Weiss believes that triclosan not only provides no health benefit, but it is also causing harm to those who come in contact with it, from the fish in the ocean to the fetus in the human mother’s womb.

Triclosan is an antibacterial agent used in many everyday products including liquid hand soap, dishwashing detergent, mattresses, shower curtains, bathtubs, and cutting boards. According to a 2008 review of government and scientific documents, the Environmental Work Group found no evidence that triclosan’s widespread use gives consumers the increased germ killing benefits the products promise. Still, they found it touted by leading brands like Softsoap, Dial, and Bath & Body Works, and listed on the labels of almost half of 259 hand soaps. Read about EWG’s investigation at www.ewg.org/reports/triclosan.

Dr. Weiss sees case against Triclosan as overwhelming. This is only a short summary of the evidence he has found.

As far as the economics are concerned, real numbers are hard to come by but Ciba (now BASF) is the dominant player in the approximately $200M business of selling the raw material which goes into anywhere between $1-6 B worth of consumer products. The most powerful lobbies are the CTFA and the American Chemistry Council but their strength is limited to regulatory and political arenas and it is doubtful that they would be able to turn the tide in the forum of public opinion where this is destined to be decided.

Other countries are taking action. In the past 10 years, Norway has announced the intention to ban the import of consumer products including Triclosan, major grocery chains in Great Britain have phased out triclosan from their products, and the Danish EPA advised a voluntary ban on Triclosan containing products because of environmental concerns. It seems it will require a widespread shift in public opinion to effect real change in the United States.

Be sure to check out CleanWell’s hand sanitizer and other safe personel care products in the Sprout online shop.