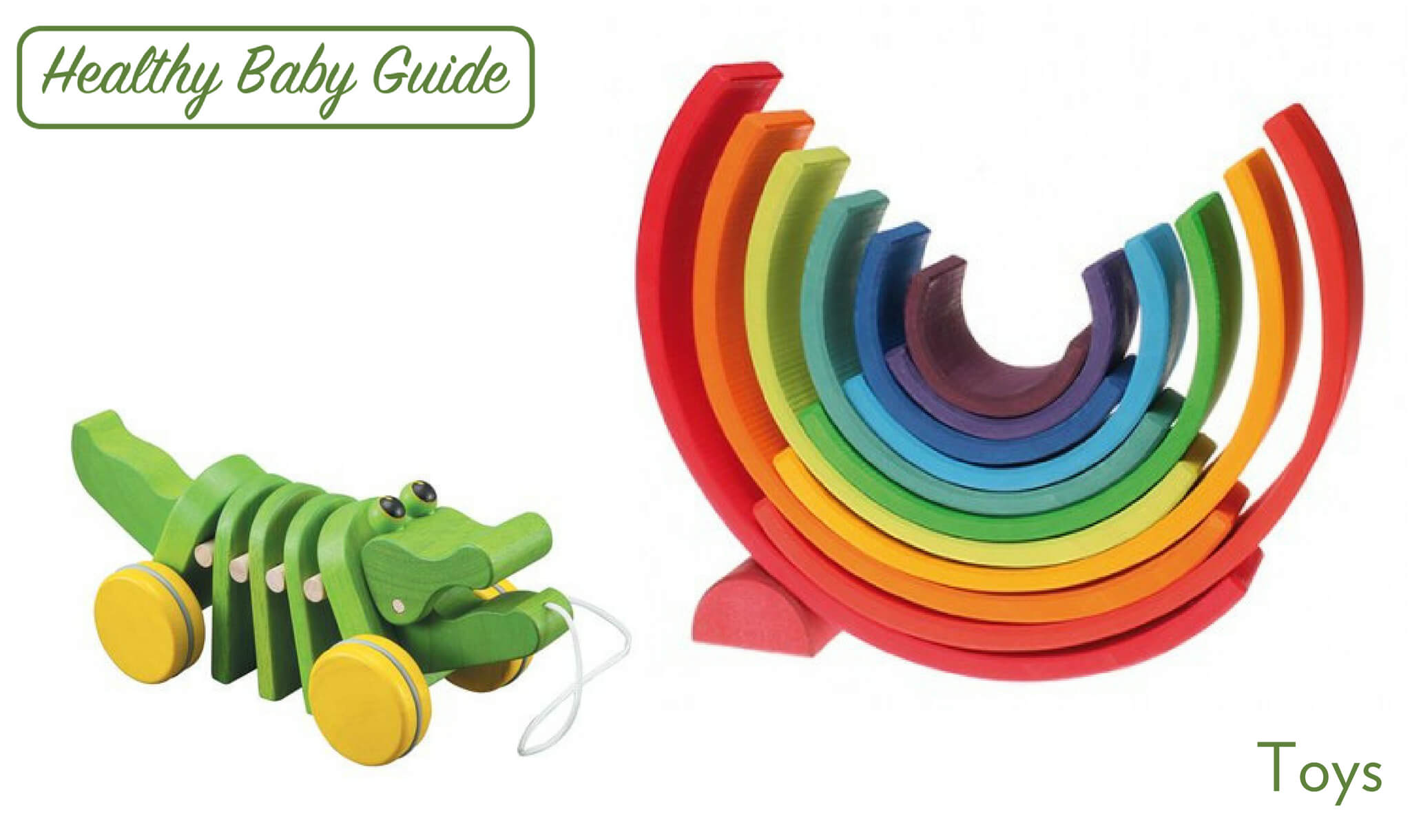 Toys inspire children’s imagination and help them to develop physically and intellectually. Babies can spend hours playing with (and chewing and sucking on!) their toys. Our Toys Healthy Baby Guide is here to help you! Make sure that your baby’s playtime is safe by investing in wood toys colored with natural dyes or plush toys made from organic cotton instead of the usual cheap plastic that clutters your home.

What you should know:

The toys children play with are often made of ingredients that you wouldn’t want your child to ingest. Though lead paint and phthalates have both been banned from children’s toys, it is not yet clear how compliant toy makers will be with these rules. In addition, plush toys can be made of synthetic materials or cotton that has been treated with pesticides. We suggest that children play with wood toys colored with natural dyes or with plush toys made from organic cotton instead.

Many soft plastic toys contain PVC (polyvinyl chloride gas vinyl chloride), which can release unhealthy fumes and is a known carcinogen. These toys often contain phthalates, believed to be hormonally disruptive, as a softening agent to make the PVC pliable. One rule of thumb is that if a toy smells like a new shower curtain or has #3, it probably has phthalates.

Phthalates are chemicals that are used in beauty products and to make plastic more flexible. They have been found to cause liver cancer in animals and can cause problems to the reproductive systems of fetuses and children. In 2004, the EU banned phthalates in children’s toys. A 2000 study by the CDC found that 75% of Americans tested had traces of phthalates in their urine.

The US passed the CPSIA (Consumer Products Safety Information Act), banning phthalates from children’s toys. Starting February 10th, 2009, three phthalates, DEHP, DBP, and BBP, were permanently prohibited by Congress in concentration of more than 0.1% in “children’s toys” or “child care articles.” A “children’s toy” means a product intended for a child 12 years of age or younger for use when playing, and a “child care article” means a product that a child 3 years of age and younger would use for sleeping, feeding, sucking or teething. The ban applies only to toys manufactured after February 10th, 2009. Three additional phthalates, DINP, DIDP, and DnOP, were prohibited pending further study and review by a group of outside experts and the Commission. This interim prohibition applies to child care articles or toys that can be placed in a child’s mouth or brought to the mouth and kept in the mouth so that it can be sucked or chewed that contains a concentration of more than 0.1% of the above phthalates.1

It remains to be seen how strongly this rule is being enforced. A senate hearing in 2007 revealed that the Consumer Product Safety Committee had just one person to analyze lead in toys.2 Though lead paint has been banned for years, some studies have found lead in many of the children’s toys that were tested.

Throw Out Your Old Plastic Toys!
Read All Our Healthy Baby Guides.