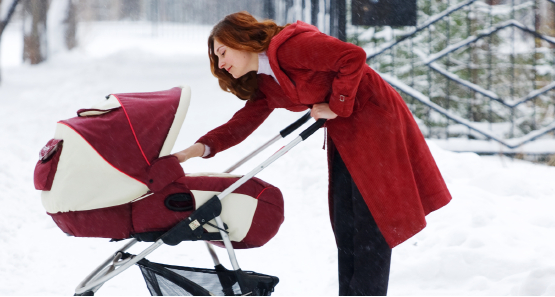 Our family just spent ten days with dear friends who live in Copenhagen, Denmark and have two kids about the same ages as our own. We ended up spending a lot of time discussing the similarities and differences in the way we raise young kids in our two countries. It was extremely interesting. I think many of us assume that the way we do things in the US is always the best way, but I am not so sure.

Most Danish babies take all of their naps outside, even in the middle of winter. People leave their babies in strollers sleeping in the front of restaurants or outside of their apartments, and nobody needs to worry that anything will happen to them. They believe that the babies sleep better in the fresh air, and it seems to be true. If only we had that kind of trust in strangers here!

On the streets of San Francisco and New York, we see babies every day being pushed around in their car seats secured onto a stroller. This is a very typical sight here, and before seeing it through Danish eyes, I never thought twice about it. I had heard that it wasn’t great for a baby’s spine to nap in his car seat, but I didn’t think about that as it related to strolling. My Danish friend Signe was surprised to see so many babies here spending hours in their car seats. She said that you would never see that in Denmark, except from visiting Americans. Everybody there has been taught that a baby should spend no more than a half hour in a car seat at a time. In fact, the Danish Board of Health recommends that car seats be used for transportation, not “as a sitter or on shopping trips”. I wonder if this is a habit we should be reconsidering.

I have recently been getting concerned as my three-and-a-half year old Hannah can unclip the chest harness on her car seat. It turns out that I probably shouldn't be worried about that at all. If anything, I should wonder why that clip is even there. In Denmark those aren’t even included on car seats and don’t seem to be necessary as long as the straps are pulled tightly. There seems to be a strong argument to be made that these types of clips are not effective in a crash and can actually be harmful. They are so worrisome that they have been made illegal in Europe. So why are they on all of our seats here?

I am sure many of us show off our kids every day without even thinking about it. I have never even considered it showing off. I say, “Hannah, tell our friends what two plus one equals”, “Amber, do a twirl like you learned in ballet”, or “Girls, sing the ABCs to Grandma”. I just think it’s cute and that people want to see them on display like this. Apparently, this is not so common in Denmark. Having it pointed out to me has made more conscious of doing it. I try now to make sure when they are showing off that at least it is for the girls’ enjoyment and not my own.

This probably is the cause of the most significant cultural difference between mothers in the US and Denmark. With subsidized childcare, mothers don’t have to worry about how they are going to be able to take care of their kids while they are out of the house. Thus a much higher percentage of women in Denmark are working outside of the home – nearly 90% of all Danish moms go back to work after their average one year paid maternity leave. I cannot even count the number of women I know who enjoyed the jobs they had before they had kids, but felt they had to quit because they didn’t make enough after taxes to pay for childcare. They therefore felt they would be “paying to work”. Women in Denmark do not have to make that choice. I wonder how different our workforce would look if that were the case here.

In Denmark, most families prioritize eating meals together as much as possible. Danes are willing to tailor working hours to be sure that the entire family can be together for breakfast and dinner. This can be too much of a good thing, as Danes are famous for their long drawn out dinners. However, in our busy lives, many Americans we know are often eating on the run or missing meals with their kids. We could probably gain something by, as a culture, prioritizing meals that coincide with family time.