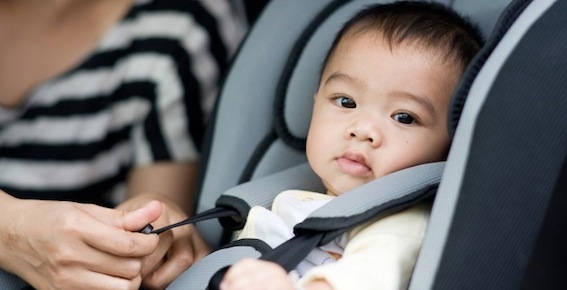 At first thought, the idea of having your baby’s products be flame retardant seems to make sense. Of course you want to protect your baby from the risk of being caught in a fire. However, as I began to learn that the rules for flame retardants in products like mattresses were created in the seventies when people were smoking in their beds, I started to wonder if this really applied to the safety of my baby. Then when I learned that many of the chemicals used back then to make these products “safe” have since been proven to be harmful themselves, I started to think that this was a silly trade off. I know some people don’t agree with me, but I now believe that the risk of my daughter playing with matches and lighting her nursing pillow on fire is much smaller than the risk that she will day after day put her head on something that off-gasses a chemical that could hinder her development. A study by the Green Science Policy Institute brought to light the dangers of a number of flame retardant chemicals, as well as their prevalence in the products we use around our children. — Suzanne Price

The Green Science Policy Institute provides unbiased scientific data to government, industry, and non-governmental organizations to facilitate informed decision-making about chemicals used in consumer products. The Institute published a 20 page in-depth report called The Safe Kids Buyer’s Guide. The below is a summary of the report.

According to the Institute, children in this generation have higher rates of serious health problems that may be caused by their environments than those of previous generations. Flame retardant chemicals may be adding to these problems. The study found that 80% of baby products tested contained flame retardants that are either linked to adverse health effects or are lacking adequate health information, despite the fact that the chemicals provide no fire safety benefit.

In California, a flammability standard was passed in 1975 calling for all polyurethane foam in furniture and baby products to withstand a 12 second exposure to an open flame. The response has been the addition of high levels of flame retardant chemicals to products containing polyurethane foam. However, according to the Institute’s reading of the National Fire Protection Association’s data, this has not led to a measurable improvement in fire safety in California.

How does this affect your kids?

Toddlers show 3-4x the level of flame retardant chemicals in their bodies compared to their parents. This is because the chemicals escape from furniture and settle into house dust, which gets onto the hands, food, and toys of toddlers. It is then ingested when the toddler puts his hands in his mouth.

How Can You Protect Your Family From Toxic Flame Retardants?