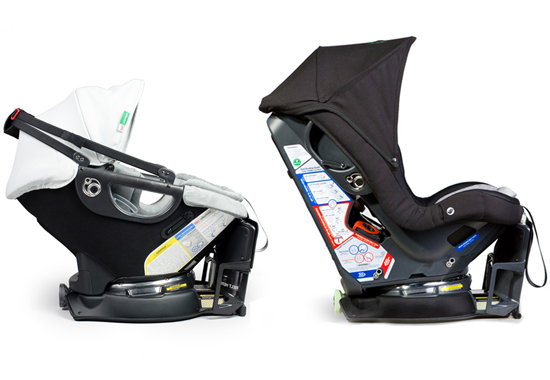 Check out all the Sprout Approved Car Seats here, including the newest, flame-retardant-free car seat!

In January 2015, we decided to stop selling Orbit Baby car seats. I want to explain the sequence of events that led to this decision.

First, I want to explain that all car seats legally must meet the flammability standards of the inside of a car. To achieve this, some type of flame retardant chemical was always used (at the time of writing). Some flame retardant chemicals have been found to have extremely detrimental effects on human health. (See the Green Science Policy Institute's website to learn more.) We have tried to find car seats for infants that do not contain the most harmful of these chemicals. For a list of what Duke University sent us as the 7 flame retardant chemicals to be most concerned about, see the bottom of this article.

Initially, we only carried the car seats by Orbit Baby as their foam was certified by OEKO-TEX®, an organization that tests for the most harmful chemicals.

Around the time that Orbit introduced its newest model, the G3, we heard that their foam had changed, and that it was no longer OEKO-TEX® certified, only the fabric was. When we inquired, Orbit explained that the foam supplier they had previously used had gone out of business, and that they were not able to find another source of OEKO-TEX® certified foam. They assured us however that they had their own third party testing performed that confirmed the foam still did not contain any of the most harmful flame retardants.

In early 2015, a number of bloggers mentioned that Orbit car seats were found to have detectable traces of a chemical called tris in the foam, based on results from a study held at Duke. I requested the testing results, and saw that the letter from Duke verified that tris (one of the most harmful flame retardant chemicals) was found in the test sample of foam. However, the results only indicated that tris was detected (by a check mark). It did not give the level of concentration found.

I sought a response from Orbit Baby and was assured that their testing showed no sign of tris. However, they still wouldn’t share the actual data. I decided that we needed to get our own testing done. I sought out a lab that would provide more details such as concentration of chemicals found, but was repeatedly referred to Duke University's study as the only lab able to do an individual test. (For interested customers, you can learn how to have your own foams tested here.)

I cut a piece of foam out of an Orbit Baby car seat as well as from the Nuna Pipa, the other infant car seat we sell, and sent them both to Duke for testing. The Orbit Baby foam sample was found to have a detectable level of TDCPP, also called Chlorinated Tris. The foam from the Nuna Pipa was clear of all seven flame retardants for which the lab tested.

We shared our results with Orbit, but they were still not willing to share their data with us. Given our Duke results and the fact that we have nothing official from Orbit to contradict them, we immediately pulled Orbit Baby car seats from our shelves.

We recently tested the foam from a Clek Foonf (all Clek's car seats that we carry use the same foam), and are pleased to announce that the results came back clear of all seven flame retardants for which the lab tested.

Check out all of our car seats here!

PentaBDE
PentaBDE is a commercial flame retardant mixture containing brominated chemicals called PBDEs (polybrominated diphenyl ethers). PentaBDE has been used for decades in residential furniture, but due to concerns over their persistence, ability to accumulate in humans, as well as their potential toxicity, the US began a phase-out of pentaBDE in 2005.

For more information on PBDEs, including pentaBDE, read the ToxFAQs summary created by the US Agency for Toxic Substances and Disease Registry.

TDCPP
TDCPP, or tris (1,3-dichloro-2-propyl) phosphate, is an organophosphate flame retardant that is being used to replace PentaBDE. TDCPP, which is used as an additive flame retardant in resins, polymers, latexes, and foams, is most widely used in the US (annual estimations are 4,500-22,700 metric tons).1 There is evidence that TDCPP is a probable carcinogen and a developmental neurotoxicant2, as well as an endocrine disruptor in fish.
For more information on TDCPP, read
•This Environmental Health Perspectives article,
•This technical report published by California’s EPA in 2011, and
•This factsheet from EPA’s Environmental Profiles of Chemical Flame Retardant Alternatives report on their Design for the Environment page.

F_i_r_e_m_a_s_t_e_r_® _5_5_0_ _
Firemaster® 550 (FM 550) is a mixture of brominated and organo-phosphorous flame retardants. It was advertised as a replacement for pentaBDE following its phase-out. Other than some limited testing carried out by the manufacturer, little information on the health effects of Firemaster 550 is available. However, a recent study conducted by researchers at Duke University and NC State found that some of the components in FM 550 bioaccumulate and act as an endocrine disruptor. FM 550 may also cause obesity, metabolic disruption, and increase the onset of puberty.

V6
V6 is a chlorinated organophosphate flame retardant that can contain TCEP as an impurity in the mixture. TCEP is considered a carcinogen.

T B P P
TBPP, or Tris-isobutylated triphenyl phosphate, is a mixture organophosphate flame retardants that do not contain halogens (e.g. bromine or chlorine). About 40% of the TBPP mixture is a chemical called triphenyl phosphate (TPP). Limited information exists on the health impacts of this mixture, but scientific studies have shown that TPP can have high acute aquatic toxicity.
EPA conducted a risk characterization for TBPP, click here to read their technical document from 2008.

MP P M i x
MPP, or methyl phenyl phosphate, is a mixture of organophosphate flame retardants that do not contain halogens (e.g. bromine or chlorine). Triphenyl phosphate (TPP) is also a primary component in MPP (see above for more information on TPP). Little information is available on the toxicity and levels of exposure to chemicals found in this mixture.

T C P P
TCPP is very similar in structure to TDCPP (see above) – it’s used as an additive flame retardant in resins, polymers, latexes, and foams, and is most widely used in the US (annual estimations are 4,500-22,700 metric tons).3 As a relatively new flame retardant additive, little is known about possible health effects.